Myth and Hysteria - the Ebola Show

​​Students in my Art Appreciation class, which meets once a week, decided to take on the Ebola epidemic as a subject of study this semester. We took a look at the subject of  myth, hysteria, and the after life, all subjects artists have dealt with for centuries (Bosch comes to mind right off, but they found plenty of their own examples). It was a chance for me to address the new core curriculum objectives required by the state of Texas for the Creative Arts,  Teamwork, Social Responsibility, Critical Thinking, and Communication. The challenge for me was to synthesize them all into my teaching. One day one we decided on a topic, and Ebola was it. 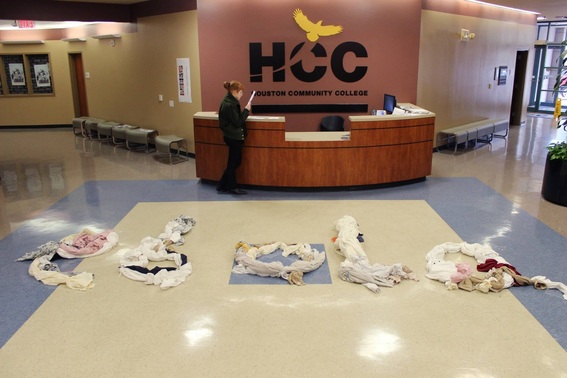 I announced my intentions for the project on Facebook to my friends as Notes to Self which said the following:

Student teams in Art Appreciation, HCC, Southeast, will present adequate or fantastical solutions to fears associated with the Ebola virus. Each team will communicate their solution in visual form, a work of art. Written analysis of data on Ebola will be collected then shared in online group forums. Types of information to be studied: visual, text, and statistical. Faculty member will lead in the discovery of information as it relates to the appreciation of art. This discovery process will take place in the form of traditional lecture and a variety of types of research to include surveys and personal interviews. Students will verbally discuss their project intentions with each other during class time, face to face, and in their online groups. There will be an installation of the final project in a public place which may include: campus, off campus, the world wide web, or a social media site. Three quarters through the semester, the artwork content and materials will be communicated to the instructor, leaving time for improvement before its final presentation. Removal or the continuation of the artwork in some form in society is the responsibility of the student or group and an integral part of the project activity.

​I learned that students do not have to be art majors to make conceptual art.They are not as naive as we might think, either, so they have things to say and consider during the process. The used the technology to communicate between themselves and talk about what they were seeing and learning in class.  I began to recognize that groups have inherent leaders with different skills. The topic was one they were interested in, certainly, and I became their guide to making public art for the foyer about a serious subject..

The fact is that the first Ebola case in the USA happened during this semester, in Dallas, Texas, not long after the classroom consensus was that none of them would come close to any contact with the transmittable disease, but it still scared them.. After the media hysteria came a decline of interest in the subject within 8 weeks, but not in our classroom because we had more to talk about. We  managed to keep our cool and our fears under control as I lead in directing them to all the main themes expected of a traditional art curriculum- the elements and principles of art, introduction of art history's periods and styles (which they loved to search out on their own and add to my lectures), and very importantly, they got a lesson in the practical reasons artists make what they do and what art can say in a more eloquently way than words might.  Students broke into spontaneous applause after the install in the hall - for each other and for themselves.  One of the best parts for me was reading their thoughtful written reflections after the work came down.